Here's Why the PR Industry is Failing

This article was originally published in Fast Company magazine.

It’s hard to say an industry is failing when it’s growing seven percent annually, and its ranks have swollen to nearly five professionals to every single journalist, a ratio that’s more than doubled over the past decade.

But when it comes to the current state of the public relations industry, it is.

If you have any doubt, just ask a journalist. Or just follow a few on Twitter and Facebook. You won’t have to wait long to hear them complain about bad practices in the PR industry.

Does that mean PR people are the problem? No. These same reporters will quickly point out specific publicists upon whom they rely and respect.

So what’s the problem?

In most cases, it’s outdated tools, or services that facilitate bad behavior.

These wire distributions services mask their ineffectiveness with content-sharing relationships that proliferate press releases far and wide across the internet to sites that no one really reads. But it gives the impression of press coverage when it’s simply reprints—in fact most sites will label such content as “via PR Newswire” or similar credibility-killing terms.

Then there are media databases, which are the modern day version of massive Rolodexes of journalists, their contact information, and interests. The problem is the data are updated manually, which means they’re perpetually out of date, at best. A couple years ago I looked up GeekWire’s Todd Bishop in Cision, the most popular of the media databases. Todd is one of the most influential technology journalists in the country, but Cision told me he worked at the Puget Sound Business Journal, a position he’d left four years earlier. 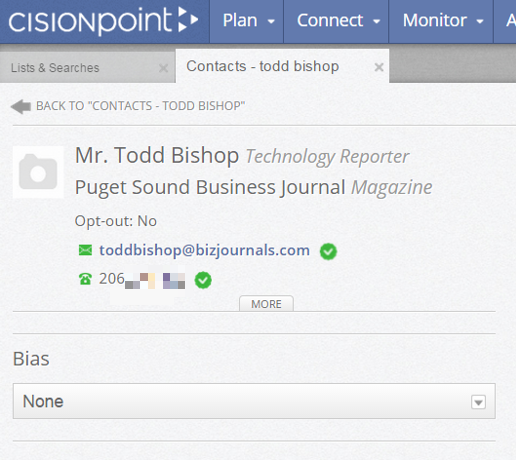 Even worse, however, is the ability these databases offer publicists to create massive media lists and then indiscriminately email journalists on that list en masse. Or as journalists call it, “PR spam.” Consequently many business reporters get more than 200 emails a day from PR people.

What about PR agencies? The truth is most PR agencies are staffed with quality people with solid press relationships. The biggest beef that journalists have is getting an agency representative who’s too junior and really doesn’t know the business he or she is pitching. But really, the agency folks do a good job. If you can afford it, go for it and you’ll likely get good bang for the buck. PR is a relationship business after all, right?

Yes, but consider this: So is Sales. And HR. Not to mention customer relations and supplier management. Lots of people work in these industries, but the main difference between them and PR is that PR has not seen the kind of automation the others have.

That’s what’s next: There are a handful of companies out there seeking to disrupt the status quo. Everything from analytics services like AirPR, to media relations services such as PressFriendly, or services that help agencies and big brands manage their data and connections like IrisPR.

They key for some is flipping the equation from an unbalanced obsession with the companies seeking promotion to focusing on the real customer in the PR process: the journalist.

These “PR Tech” vendors are on the fringes for now. In part because no one ever got fired for using PR Newswire.

And that’s part of the reason the PR industry is failing.

Smart publicists are availing themselves of newer technology solutions to help stretch their budgetary dollar. They are testing the bounds of possibility and pushing an industry forward that is ripe for disruption. The early adopters could breathe life into an industry that is failing, and in the process reap the rewards.

Bill Hankes is a longtime public relations veteran, having served as director of Bing Public Relations at Microsoft, and vice president of corporate communications at RealNetworks. Today, Bill is CEO of Sqoop, a startup he founded that helps journalists find the information they need to develop stories, some of which comes from PR professionals, but most of which doesn't.